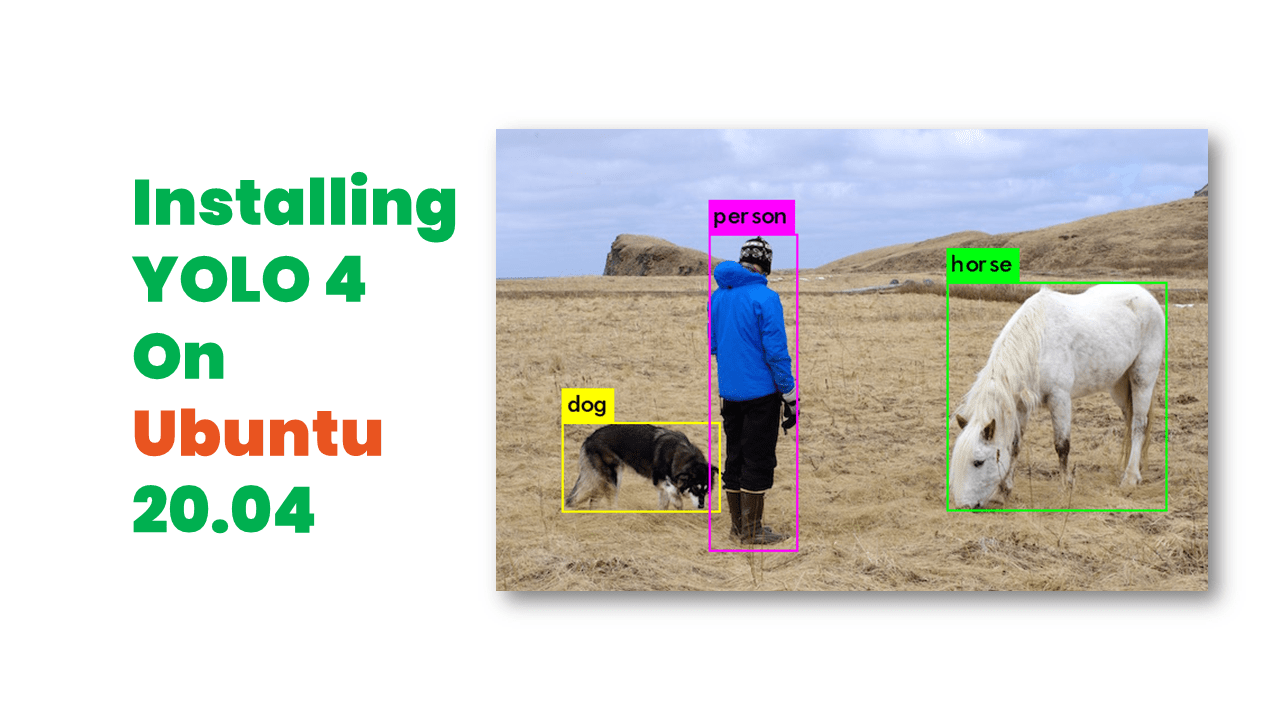 What is Object detection?

Before discussing the object detection concepts, it will be good to start with the following concepts in computer vision.

Object classification: This technique predicts the probability of different object categories( car, dog, cat, etc.) in an image, it essentially answers the question “What is in the picture?”. It can only predict one category for one image.

Object localization: This method can predict the probability of an object in the image along with its location in the image. This technique basically answers “What is in the picture and where it is?“.

Object detection: The above two methods only cares about one object and its location. In a real-life scenario, we may have to find multiple objects from an image and its position.

Each object class can be classified based on its features. The features in an image are some unique points and edges. In the object detection system, the detection algorithms separate the features of an image and classify it using some training algorithms. When the features feed to the trained algorithm, it can predict the features belongs to which category of object.

There are several feature extraction techniques and training algorithms available to do object detection. Currently, the famous methods for object detection are using Machine learning and deep learning-based approaches.

When do we need Object detection?

What is YOLO object detection?

Here are the fundamental concepts of how YOLO object detection can able to detect an object.

As we have seen earlier, the YOLO is not looking for interesting ROI, instead of that, it is splitting the image into several cells typically using a 19×19 grid. Each cell is responsible for predicting 5 bounding boxes (there can be one or more objects in a cell). If it does that, it will finally end up in 1805 bounding boxes for one image.

Who created the YOLO Object detection?

The actual author of the YOLO Object detector is Joseph Chet Redmon. Here are some of his web presence so that you can connect with him

Here are some of his famous TEDx talk

This is one of his YouTube course on Computer Vision

The official website for YOLO object detection project is given below

Why we use YOLO?

Here are some biggest advantages of YOLO compared to other object detection algorithms.

There are very few implementations of the YOLO algorithm that exists on the web. The Darknet is one such open-source neural network framework written in C and CUDA and serves as the basis of YOLO. It is fast, easy to install, and supports CPU and GPU computation. Darknet is used as the framework for training YOLO, meaning it sets the architecture of the network. The first author of Darknet is the author of YOLO itself(J Redmon).

The official git repository of Darknet can be found here

What are the different versions of YOLO?

As of now, there are four different versions of YOLO got released, From YOLO v1 to YOLO v4. Let’s have a brief overview of each version.

You can download all YOLO paper from the following link

The first research paper about YOLO was published CVPR May 2016, and it got the OpenCV People’s Choice award. Given below the talk he has delivered at CVPR.

The YOLO is a network was “inspired by” GoogleNet. It has 24 convolutional layers working for feature extractors and 2 dense layers for doing the predictions. This architecture works upon is called Darknet. There is a fast version of YOLO called “Tiny-YOLO” which only has 9 convolution layers.

YOLO v3 released in April 2018 which adds further small improvements, included the fact that bounding boxes get predicted at different scales. In this version, the darknet framework expanded to 53 convolution layers.

The YOLO v4 released in April 2020, but this release is not from the YOLO first author. In Feb 2020, Joseph Redmon announced he was leaving the field of computer vision due to concerns regarding the possible negative impact of his works.

Compared with the previous YOLOv3, YOLOv4 has the following advantages:

The first step in building/installing YOLO v4 on Ubuntu is installing its dependencies. Here I am assuming that you have a freshly installed Ubuntu 20.04 installation which is only having default installed packages.

Note: If you have already installed the ROS framework, Open-CV, you don’t need to install it again as the prerequisites. It may break the existing packages.

Here are the important prerequisites of YOLO.

Use the following command to install the prerequisites, you can find the explanation of each one after that.

The Ubuntu 20.04 is having CMake version 3.16, we can install this using apt package manager.

For checking your CMake version, you can use the following command

It will give you following output.

You can install CUDA if you have a GPU from NVIDIA, adding GPU for YOLO will speed up the object detection process.

CUDA is a parallel computing platform and application programming interface model created by Nvidia. It allows software developers and software engineers to use a CUDA-enabled graphics processing unit for general purpose processing.

Here are the tutorials to install CUDA 10 on Ubuntu.

How to install CUDA on Ubuntu 20.04 Focal Fossa Linux

OpenCV is a library of programming functions mainly aimed at real-time computer vision. Originally developed by Intel, it was later supported by Willow Garage then Itseez. The library is cross-platform and free for use under the open-source BSD license.

You can install OpenCV in Ubuntu using the apt package manager or using compiling the source code.

Here is the command to quickly install OpenCV and its Python extension using the apt package manager.

If you want to customize your OpenCV installation, you can try the source compilation.

After installing OpenCV, you can find the existing version of OpenCV using the following command

Here is the installation procedure for cuDNN.

OpenMP uses a portable, scalable model that gives programmers a simple and flexible interface for developing parallel applications for platforms ranging from the standard desktop computer to the supercomputer.

Here is the command to install OpenMP in Ubuntu 20.04

Other Dependencies (For CPU and GPU)

Here are other dependencies used for CPU and GPU configuration.

You can download the YOLO v4 using following command

You can build the YOLO v4 using Make and CMake command.

In this tutorial, I have setup YOLO v4 in my PC with the following configuration.

I have tested YOLO v4 in GPU and CPU configuration. You can find the detailed video at the end of this post.

Set AVX=1 and OPENMP=1 to speedup on CPU (if an error occurs then set AVX=0),
Set LIBSO=1 will create the shared library of the darknet, ‘libdarknet.so‘, which is used to interface darknet and Python.
Set ZED_CAMERA=1 if you are working with ZED camera and its SDK

set GPU=1 and CUDNN=1 to speedup on GPU

After doing these changes, just execute the following command from the darknet folder.

If everything works fine, you may get an output as shown below.

After build, you can able find darknet and libdarknet.so in the build path.

You can build darknet using CMake build. Just follow the commands below in order to build from CMake.

Note: The commands should be executed from inside the darknet folder.

If the build is successful, it will create the following files inside the build_release folder.

After building those files, copy the darknet and libdark.so from the build_release folder to the darknet folder. You also have to rename

to test the darknet Python scripts.

After building YOLO, let’s test the working of YOLO v4. To test the darknet, first, we have to download a pre-trained model. The following model is trained for the MS COCO dataset.

Now open a terminal from the darknet folder by right-clicking on the folder and execute the following commands.

The command below is for running YOLO in a single image. Both of the commands mentioned below do the same functions. The first one is for detection from one image, the second one is for multiple use cases, for eg. detection from video and webcam.

The darknet is the executable that we are getting when we build the darknet source code. Using this executable we can directly perform object detection in an image, video, camera, and network video stream.

Here yolov4.weights is the pre-trained model, cfg/yolov4.cfg is the configuration file of the model. The data/person.jpg is the input image of the model.

The 2nd command is providing the configuration file of COCO dataset cfg/coco.data, the ‘i=0‘ mentioning the GPU number, and ‘thresh‘ is the threshold of detection. The accuracy of the detection will vary if you vary this value. By default, YOLO only displays objects detected with a confidence of .25 or higher.

You may get following output if everything is successful

You can able to see the confidence of detection from the terminal.

Testing YOLO v4 in a Video

Copy the test video test50.mp4 into the darknet folder, and test YOLO in a video using the following command.

You may get an output as shown below.

The following command will start the YOLO detection using your webcam

The option c here is for camera index. The above command will open the first camera. Here is the output of the detection

You can able to read more about the usage of the darknet, Tiny YOLO, and training YOLO for a custom object from the official YOLO website itself.

Here are the test results of a single image from Jetson Nano. It can detect from one image and it roughly takes 1.2 sec. It will not work well with video and webcam, the FPS ~1. If you want to work with Jetson Nano and YOLO, try with YOLO v3 tiny 3 cfg and YOLO v3 weights. You will get FPS between 25 to 30.

In this tutorial, we have gone through the basics of YOLO object detection algorithms, the different versions of YOLO, installation, and testing of the new YOLO v4 version.

If you have more questions, you can comment below.